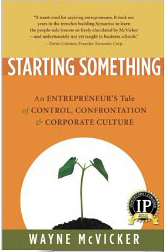 This excerpt comes from the book “Starting Something,” by Wayne McVicker, founder of Neoforma. The book is a piercingly honest and highly personal story of how a software firm that accidentally became a dotcom darling and eventually a 3 billion public company, survived its struggles in the face of daunting obstacles. Delivers a wealth of insight, information, and advice for entrepreneurs. An unflinching look at both the dark and the bright sides of corporate culture.

When we entered this new society –the word of the technology start-up- we felt quite lost in some ways. It was difficult to know how to navigate the many established, yet unfamiliar channels of communication without a guide. Jeff and I were lucky.

We were referred to Jack by the large law firm he had left to start his own practice. We didn’t think that a relationship with an attorney was a big deal. We just wanted someone who could help us set up a new corporation and negotiate a good agreement with Varian that was all.

Jack didn’t work that way. He was a big, warm man with eyes that expressed enthusiasm for any challenge –a man full of charming eccentricities, eternally late for meetings, always sliding into the room with apologies, offering drinks and food left over from his previous meetings.

At our first meeting with him, Jack’s eagerness and respect for innovation quickly put us at ease. He asked good questions, about us and about our business. He paid attention to what we said, but I felt him probing us with his eyes more than with his ears. I could see that he was making a quick decision about Jeff and me –not about the company we were forming. He was someone who relied on his intuition. We liked him very much.

After a half-hour of questions, he began to brainstorm ideas on how we could expand our business. Some suggestions were laser sharp, others wildly off course, but all were welcome. He suggest that we should get some investment money to grow our ideas. We hadn’t thought about that possibility. We figured we would have enough money to get us through to profitability. So Jeff said, “No, we don’t think we’ll need any money.”

But it was reassuring to know someone familiar with raising money, it for some reason we were to need extra money someday.

Jack actually seemed to think we might be able to make this idea of ours work. Prior to this, other than from our families, we had received support from a few people, but not much encouragement, and definitely from a few people, but not expressions of confidence. He opened a view to a world where risk and sacrifice were encouraged, even appreciated.

We had to remind him at the end of the first meeting that we had legal details to attend to. He offered a very low fee for the work he would do, saying that he would make it up when we grew. He rattled off what we needed to do. We agreed, and then he called in an assistant to take care of all the pesky details.

Over the next year, Jack inundated us with ideas. Every week he sent me envelopes stuffed with articles, clipped from a multitude of obscure periodicals, scrawled with cryptic notes and suggestions. Links to articles and websites flooded our email inboxes. This guy never stopped connecting ideas together. He could validate our ideas with technologies that were ten years away.

Jack always had smiles and encouragement for us. He effused sincere belief in us every step of the way. I could tell that this way how he conducted all of his business. His emotions were always on.

HOWEVER, I sensed ferocity beneath his gregarious exterior. A client of his told me that Jack was an absolute tiger in the courtroom and I believed it. He could be very convincing, due to the intensity of his conviction.

I was sure that his passionate emotions must take a toll on him. He could not win every battle, yet I knew he could not accept losing a battle he cared about without suffering. I must admit that I worried sometimes about whether he paid too much for this unbridled passion. But he was always there for us.

We finally realized in early 1997 that our own financial resources weren’t enough to manage our rapidly expanding business plan. Our personal debt were growing. We remembered Jack’s belief that we could get money from outside investors. That seemed worth exploring.

We met with him and, as casually as possible, asked how we might get investment money, if we were to need some. Picking up on our hint and ignoring our caution, he said, “Well, if I were to invest some money in Neoforma, then I could introduce you to some people I know who might be willing to follow.”

And it was that simple. We had our first outside investor. Jack wrote us a check for twenty-five thousand dollars on the spot. This was an extraordinary amount of money to us. I felt very proud of his confidence and took his investment very seriously.

Within another year, Jack would tell us that his firm was too small to handle the body of work our growing company needed. He helped us transition to large firm and bid us, “good luck!”

Thanks to him, we had already had more than our share of luck.